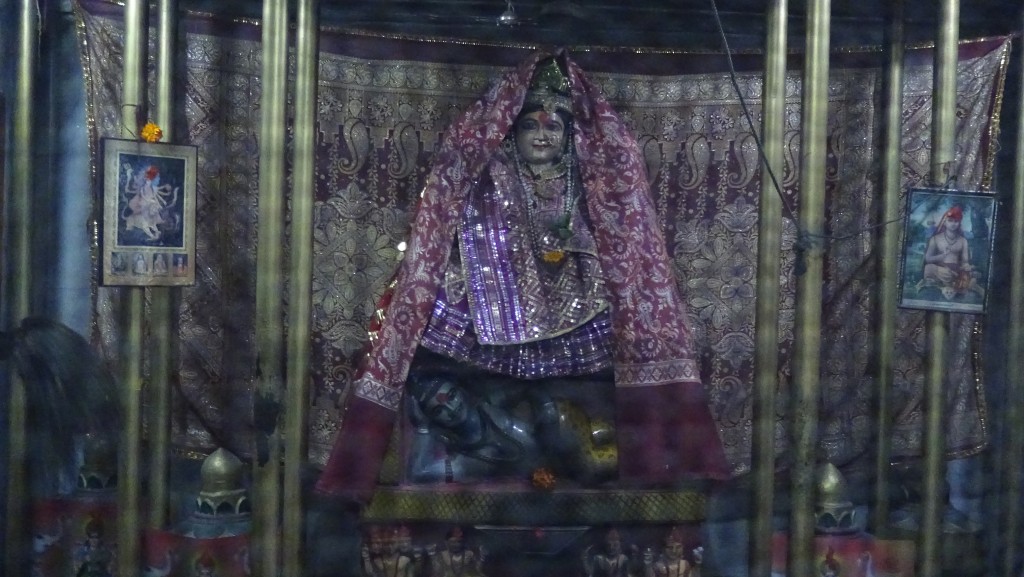 “Although uninvited, Sati – the incarnation of Adi Parashakti – was excited and determined to go to the great yajna (fire ceremony) arranged by her father, Daksha Maharaj.  It was an excellent opportunity to review his mother and family. Maharaj Daksha had invited all Devatas, Rishis and great saintly personalities of the universe, except Shiva (the husband of Sati) to whom he harbored deep antipathy.”

The Patriarch of many nations (Prajapati), Daksha Maharaj, represents the old religious beliefs and ideas of the Vedic Age which did not accept the Yoga paths represented by Shiva. Indeed, Daksha felt threatened by the followers of these paths for whom the project of union with the Supreme Brahman was the only true, the only necessary, the one who deserved all the preference.


Before the absoluteness of the meditation, what value would there be in the complex preparation of sacrifice rituals, which even involved animal sacrifice? In their concern to please and delight all Devatas, the sole purpose of yajna was to obtain transitory blessings. Even the spiritual rewards, such as obtaining a permanent place in Indra’s sky was not sufficient to ensure a safe place for the soul. And definitely the only safe place was not separate from one’s interiority. For the Yogi and Jnani, “Atman is Brahman , Atman is Vishnu,  Atma is Indra,  Atma is Shiva, the Atma is everything, and outside of Atma there is nothing.

“Upon entering the great assembly of wise brahmanas, Sati was received coldly by her father, the Prajapati Daksha. During his speech, Daksha performed obeisance full of courtesies to all its distinguished guests, and could not avoid criticizing the contemplative Path of Shiva, regarding it as something that serves no purpose. His verbal attacks entered the heart of Sati as barbs and sharp blades. Unable to bear it anymore, Sati decides to end her own life. Focusing on the Nabhi chakra and lighting the inner fire, Sati’s body was cremated.”

In order for the yajna to be provided with shakti (Mystical Power), Daksha had previously practiced a lot of Tapasya (austerities) to get Adi Parashakti as his daughter. Adi Parashakti agreed to this, but warned him Shakti would cease to be his daughter as soon as she was ignored. With the passing of years, Daksha ignored the fact that the success of his yajñas was due to Shakti. The sadhaka who does not feed with the vital breath – pranayama – the portion of the Shakti that is in the interior of Sushumna becomes entangled by worldly desires and spiritual energy ceases to move through the spine, being consumed by the fire of Nabhi /Navi chakra. On the other hand, the exclusive reliance on shakti – or Shaktism, for despising the marriage of Shiva and Sati – the mystical union between Sat and Shakti – opens at the end, a very dangerous gap.

“Knowing that he had lost his dear wife, Shiva became angry and began his famous Tandava dance, the dance of destruction! From his memory of the auspicious qualities of Sati, Shiva gives rise to 9 other forms of the Supreme Shakti (one of these forms was the Goddess Katyayani). Together, they go toward the place of the sacrificial arena, accompanied by an army of followers. Night of horror! The powers and universal forces of Shiva destroy the sacrifice and the entire assembly of distinguished personalities gathered there, including Daksha Maharaj.”

The path of meditation eclipses the ancient Vedic religion, which is then reduced to a few followers. However, the fierce confrontation with the old religious ideas gives birth to new ways to cultivate Shakti. From this point appear the paths of Pancaratras and Agamas, who worship exclusively (monotheistic) Vishnu or Shiva. The centrality of meditation and contemplation becomes the unmistakable predominant aspect of Hinduism.

“Sorrowful, Shiva carries the Goddess ashes (or resurrected body, according to other versions) through the four directions of the world. A portion of the ash falls in 51 different places, which becomes sacred places of pilgrimage endowed with transcendental energy (Shakti Peetham).”

The portion corresponding to Sati’s hair had fallen somewhere close to Vrindavan, where the Goddess Katyayni appeared to bless the gopis who loved Krishna. With elapsed years, no one knew exactly where the location of Shakti Peetham was. Swami Satyananda stopped writing and looked joyfully toward the veranda of the Ashram where his old guru was sitting. The master smiled on hearing the sound of parrots flying through the trees surrounding the Katyayani Peetha. He was happy for very soon he would travel to his old ashram in Haridvar, rebuilt with the help of loyal followers. It was there that the ashes of his Guru, Sri Lahiri Mahasaya, were deposited and where the Babaji’s Banyan was still standing.

Swami looked at his only disciple brahmacari and future successor as mahant (head) of that ashram. Reminiscences from many years ago came to his thoughts …

It was a night of torrential rain and lightning sparkled through the chinks in the windows of the humble house, illuminated by the faint light of the wicks of oil lamps. In the bedroom, a mother tried in vain to give birth to her son, with the help of a midwife aunt.

The father waited eagerly in the main room of the house, still warmed by the embers of the firewood stove. Silently, he prayed to the tutelary deity for help at that difficult time – “He Krishna! karuna sindho dina bandho jagat pate …he Govinda! Raksha mam sharanagatam”

Three loud knocks on the door announced an unexpected visit. Who would be visiting at that time of night? Upon opening the front door, strong wind gusts came through the room to the inside, extinguishing one of the lamps. Amid the darkness of night, the man could see – illuminated by the lightning flashes – the figure of an old sadhu with saffron colored clothing. A sadhu like this was only seen on the streets of Varanasi  … not in Howra!

– Your wife and son will die if you do not deliver the child in my care! – Said the swami.

The man thought not to have heard right due to the sound of rain and thunder.

– Your wife and son will die if you do not deliver the child in my care! – Cried the Swami – Promise me now, at this moment, you will allow your child to follow the path of renunciation when he gets to the appropriate age!

Hesitantly, and without no other way out, the man agreed and made the promise.

As soon as he said “Yes, I promise,” from inside the room, the cries of a newborn, and women’s voices thanking the Lord were heard. When the man turned toward the door, the Swami had disappeared. There was only a trail of a bright cloud of atoms dispersed in the air. Upon reaching 24 years of age, that same child went off to Haridwar looking for his Guru. He was the only disciple of Swami Keshavananda, who initiated him into the Order of the Sadhus and into the secrets of Kriya Yoga. He was known as Swami Satyananda. As Mahant (head) of Ashram, Swami Keshavananda took great care in the quality of the daily Goddess worship – flavored baths abhisheka, the clothes, the jewels, flowers, and arati (offering lamps). He was always the first to experience the prasadam (offered food), whose fame had spread throughout the region. The Goddess prasadam was like the tree-of-desires (kalpataru) for young maidens who wanted to arrange a good marriage, and for those who wanted to have children. Each year, the queue of pilgrims increased, and many donations were made. However, Swami Keshavananda never desired or sought  fame, wealth and sumptuous buildings. In every way he embraced Poverty: in the ashram, in clothes, words, and much more in mind and heart.

On one occasion, he realized that his disciple was sad.

The young woman was reading a book of Sri Panchanan Battacharya (the immediate successor of Lahiri Mahasaya). — In this book, Sri Panchanan Baba describes all divine manifestations as being located within the body. According to his standpoint, the Devas are mere symbolic representations of human states of consciousness. Should  man be placed up on a pedestal or altar to be worshiped?

— Son, is very common in Yoga literature establishing and  corresponding to similarities between the microcosm and the macrocosm. The Atharva-Veda already said “all the gods reside in man, like cows in a stable.” Such statements are not intended to destroy devotion to the Lord nor deify man, who is already too arrogant. What these verses of the sages are intended for is to make people seek Ananda inside the Atman …

— Gurudeva, tell me a bit more about Sri Panchanan Battacharya.

—Sri Panchanan was a notable personality, an exemplary Yogi and a beloved disciple of Lahiri Mahasaya. Endowed with a kind and compassionate nature, Sri Panchanan fought hard against animal sacrifice in Navaratri celebrations. Being a brahmana scholar, he humbly earned a living by selling flowers. He preferred to face the rejection and public humiliation for abandoning the vows of sannyasi, than to disobey Guru (who commanded him to follow the householder dharma). Although endowed with a sensitive, poetic, and musical character, he plunged into an arid and impersonal description technique about Kriya Yoga only to please his Guru. Inexhaustible was his devotion to the Guru and Kriya Yoga. 6 years of practice was the time needed to soak him in Divine intoxication, and in the 11th year of practice he was already a Master perfectly realized. Like Sri Lahiri Baba, Sri Panchanan was basically a ātmārāma.

—What is an ātmārāma? — Asked Swami Satyananda.

— Ātmārāma is a Vedantin, someone who enjoys only of his own ātma or “I” in perfect oneness with Brahman. The ātmārāmas cultivate exclusively this bhava (transcendental mood), they are not attracted to kathas (narrations about Lord), by devotional service (bhakti), and for murtis (image, statue or idol) of the Lord. You must show respect for the holiness of atmaramas because they follow the original teaching of our shastras – the Upanishads.

— What is the importance of cultivating a particular type of bhava – Dualist or Non-Dualist -to the success of Kriya-Yoga?

— On many occasions, Gurudeva Sri Lahiri Baba stressed the importance of cultivating bhava (the kind of relationship with God) suitable in the practice of Kriya Yoga, without bhava the technique would be similar to a mere physical exercise. “All you who practice Kriya Yoga with scattered minds as leaves in the wind. Focus the mind on Iswara (Shiva)!” Lahiri Baba has revealed that the desire for results was a terrible obstacle in the Kriya path. But when you put the Bhava first in order of importance, you practice Kriya without longing for results. Thus, bhava is like ghee (clarified butter) on the sacrificial fire of kundalini, which makes the practice of Kriya Yoga extremely fruitful. The energy begins to flow vigorously through the spine, and there is a tremendous divine intoxication. It is the sacred ecstasy! “I offer my humble obeisances to the feet of Swami Keshavananda, who is like a vase overflowing with the blessings of his Guru, Lahiri Mahashaya and his Paramguru, Babaji. The Divine Mother,  Lord Shiva’s consort, who is always satisfied with his service at her feet. “